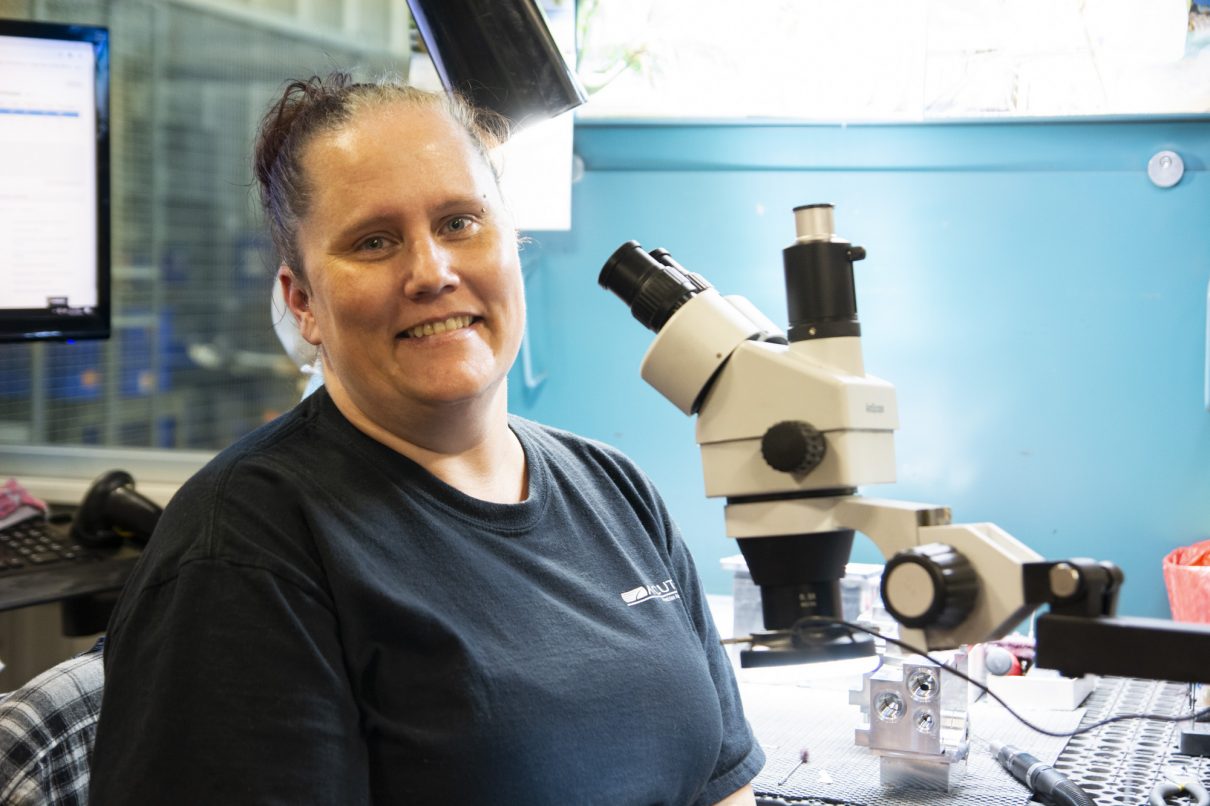 Carol Rhoads, a Deburr Technician at our Meadville facility, knows the benefits of working at a family-owned business like Acutec Precision Aerospace. Previously working as a manager at a grocery store, Carol decided to follow her husband, a machinist at our Saegertown facility, and apply at Acutec to find a career that would provide an atmosphere she was looking for. Initially working in Secondary, Carol moved to Deburr two years ago and has loved her time in the department. In Deburr, Carol is part of a team that works to break edges, remove nicks, burrs, and scratches from parts, and ensure that all parts are pristine and up to Acutec’s standards. In Carol’s specific role, she currently works to deburr manifolds, check all parts that exit the room for quality, and trains new employees for a successful career in Deburr.

If there’s one thing that keeps Carol at Acutec, it’s the people. In the deburr department, she describes the workers as a family. From birthday parties to acknowledgments for extraordinary work—there’s always a little touch of personality in each day. Additionally, she knows that everyone in the room has each other’s back. There’s an understanding that the team won’t let another employee fall behind and everyone looks out for one another both professionally and personally. This family-like bond creates a positive atmosphere around the room. Furthermore, Carol emphasizes that there’s not a ‘work to earn a paycheck mentality’ in the space and that negativity is not present in her day-to-day life at Acutec.

When coming to Acutec, Carol had no experience in a manufacturing environment, but when she interviewed for the job our team knew she would excel in our shop. Initially, Carol trained in our Secondary department, and then she received additional training for her current role in Deburr. Through her training in the two departments, she has learned how to guide a new hire to become an effective and successful Acutec employee, offering valuable advice about tool usage, spotting burrs, and creating an effective workday. In her advice to future Deburr technicians, she emphasizes that one needs to take their time identifying burrs in parts and that it can take up to sixty days to fully grasp the job.

Outside of Acutec, Carol enjoys the outdoors—in her free time, you can find her four-wheeling, hunting, and fishing. When she’s not outdoors, she spends her time playing games on her phone (she describes herself as a professional online card player!). As for her favorite aircraft, she loves helicopters and says she would jump at any opportunity to ride in one.

Thanks for everything you do, Carol! Learn more about our career opportunities to see how you can launch a career like Carol’s.